When my partner Richard and I joined the Kings of Code Hack Battle at the Next Web Europe Conference in Amsterdam last week, we knew that we wanted to make an app that would stand in stark contrast to the infamously misogynist app from TechCrunch Disrupt last year. It's about time that we start building meaningful apps at hackathons that inspire social change.

The Kings of Code

The Kings of Code Hack Battle at The Next Web European Conference brought together over 30 teams of programmers, and designers to "hack" for 30 hours on new and inventive ideas. The API partners for this year included Spotify, SendGrid, Deezer, Twitter, Pearson, Spotify, Mashery, Verisign, Paypal, and Push.co. We decided to use the Twitter Streaming API, as well as the Paypal API for donations.

As one of a handful of female participants, I felt even more passionate about pursuing our activist hack after being asked strangely discriminatory questions like:

Needless to say, women are still facing some serious stereotypes in the tech field, and it's really up to all of us to work to shattering those stereotypes so that future hackathons will be much more diverse.

Hashtagivist stands for "Hashtag Activist" was inspired by the amazing work of Suey Park, Mikki Kendall, and other proponents for social change and equality on Twitter.

There are so many of us that believe in equality, and want to lobby for social change, but either aren't that well-versed with Twitter, or have trouble finding hashtag campaigns. For me, I'd always catch campaigns after-the-fact via a blog post, and think to myself, "Gee, I wish I had seen that on Twitter when it was happening. I would have definitely retweeted, or taken action in some way."

Users can search the site by topic (more topics to come!), and receive email alerts as soon as a new hashtag campaign goes live in their areas of interest. 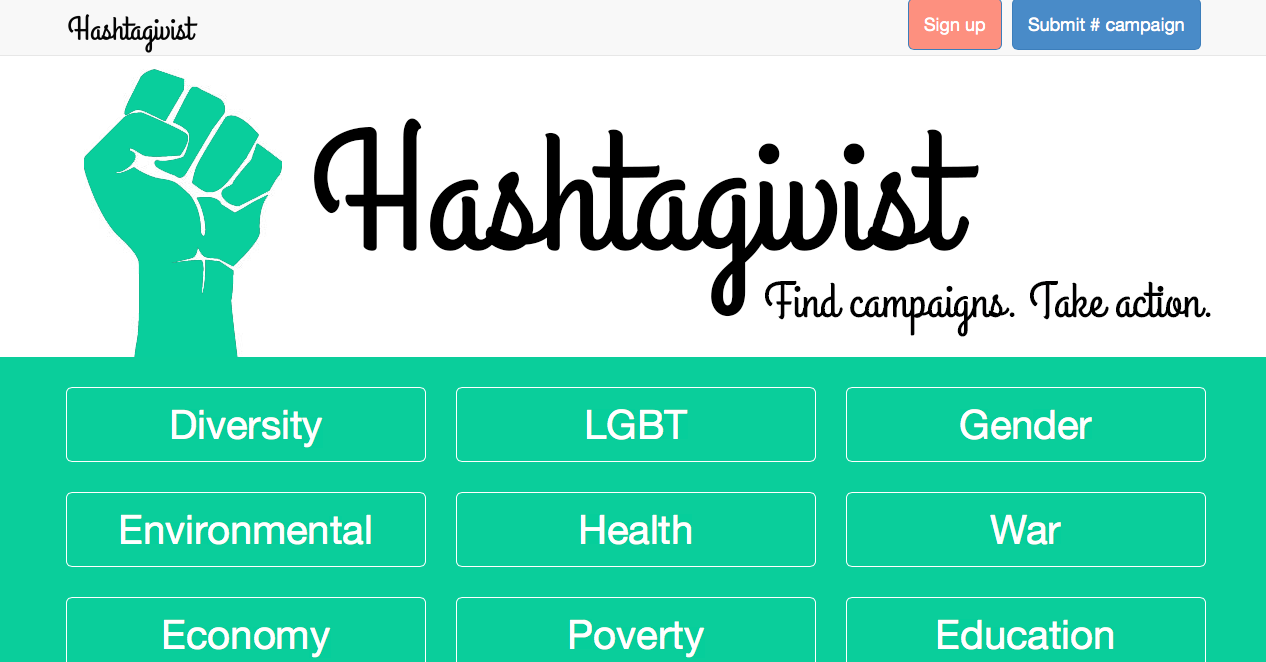 Watch our Pitch at The Next Web Hack Battle 2014

In case the web player doesn't load properly, our pitch starts at 1:26:00.

We were stoked to win the Twitter API prize at The Next Web Hack Battle for our work on Hashtagivist! We're so enthused that Twitter liked our integration of their streaming API, as well as our idea to broaden the audience for social justice hashtag campaigns on Twitter.

We'd love to hear your thoughts!

Although this started out as a fun hack for a hackathon, we feel that this site may be beneficial to hashtag activists on Twitter, including non-profits, organizations, and individual activists. Please let us know what you think of our site in the comments below, and please give us feedback. This platform was built for you, so we'd love to optimize it based on your needs. Thanks!